Legendary death metal maniacs Aborted have released their new single, “Infinite Terror”. Get it here and watch a video for the track below. 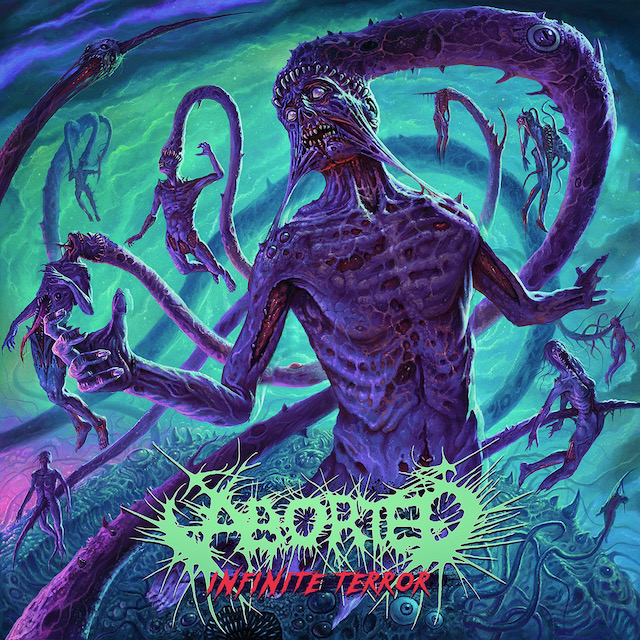 A message reads: “Watch as we tear apart an abandoned asylum, while a young woman’s sanity is shredded by a haunting presence, blurring – no, erasing – the lines between the real and the surreal. Turn up your high- speakers, turn on a light and submit to INFINITE TERROR.”

On a moonless night, metal powerhouse Nuclear Blast dared to stare into the abyss of pitch black and summoned one of the most vicious and menacing forces on the European death metal scene to join their ranks. . Aborted recently signed a contract with the label.

The true storyline behind the signing of this exceptional genre pioneer might have been a little less dramatic, but the promise of an exciting future remains.

Sven de Caluwé (vocals) commented, “We couldn’t be more thrilled to announce our signing to Nuclear Blast, one of the premier extreme music labels with tons of label mates we love. We are very excited to see where this crazy trailer after a very long and solid partnership with Century Media, it was time for us to try something new. To celebrate our signing with Nuclear Blast and the next monster of a tour with our friends Lorna Shore, Ingested and more, we decided to release a new single. “Infinite Terror” will obliterate all of your senses. The song is inspired by “Event Horizon” and marks the debut of new guitarist Dan Konradsson (Ophidian I, Une Misère). Expect something dark, imposing and HEAVY as shit!”

Jaap Wagemaker, A&R Nuclear Blast Europe, added: “Nuclear Blast are very pleased to announce the signing of brutal death metal maniacs Aborted. Aborted are one of the pioneers of the genre. Originally founded in Belgium, they have come a long way from underground death/grind to create a highly successful and unique brand of cinematic horror-themed extreme metal that is highly compatible with today’s tech death and deathcore scenes. beginning of a successful career Aborted further worked on their status by releasing classics such as The Necrotic Manifesto and Retrogore which somehow managed to top this album and showed what the band is capable of: elevating death metal to next level of intensity, atmosphere and brutality. Nuclear Blast and Aborted look forward to continuing to push the boundaries of high class brutal death metal together in the future!”

With their cinematic horror-themed extreme metal, Aborted have mastered a dark craft that is hard to compete with. The Belgian band have dominated the world of death metal since vocalist Sven de Caluwé formed the band 26 years ago. As the only original member, he led the group like a demented conductor.

Shapeshifters are abortive, evolving from flamboyant deathgrind to more groovy fare before settling into a technical approach to death metal.

Their ability to compose and perform an uncompromising blend of death metal and grindcore, complemented by provocative artwork and merchandise designs, has allowed Aborted to become an essential pioneer in the extreme metal scene over the course of their career. which saw them release 11 hits. full albums since the mid-90s.

Despite the seemingly sinister image that is portrayed by extremely heavy and gore bands, Aborted have actively supported charitable campaigns throughout their career. They donated a portion of their merchandise earnings to “National Alliance To End Homelessness”, partnered with other groups to launch a shirt to benefit Ukrainian war refugees and was also a long time member from “Metalheads Against Racism”.