The mighty Kreator recently announced that his fifteenth studio album, Hate Über Alles, will be released on June 3. Five years after their highly acclaimed album Gods Of Violence peaked at number one on the German charts, the genre-defining band are proud to present this 11-track juggernaut.

Today the group released the new single “Midnight Sun”. Watch the new video below and stream the song here.

The band states, “Our new single is out now! Something a bit new for us, our first collaboration with a female artist! Featuring the amazing Sofia Portanet, adding an ethereal vibe to the track.”

For 37 years, Kreator has spearheaded a thrash metal crusade, inspiring generations of metalheads and musicians. The collision of traditional and contemporary values ​​is a sentiment that Mille Petrozza has instilled in the soul of this monumental new album; recruiting visionary producer Arthur Rizk (Power Trip, Cavalera Conspiracy, Ghostmane and Turnstile) from Philadelphia to work with the band at the legendary Hansa studio in Berlin. “Hate Über Alles” features beautifully dark covers by renowned artist Eliran Kantor (Testament, Thy Art Is Murder, Helloween), in service of a bold statement against hate and division in today’s society.

Mille Petrozza comments: “Hate Über Alles reflects the times we live in. Everything is really loud and aggressive. The way we communicate has changed, thanks to social networks. This causes a lot of imbalance. The world is in a state of life isn’t harmonious right now, it’s disharmonic… that’s where I was going with the title. 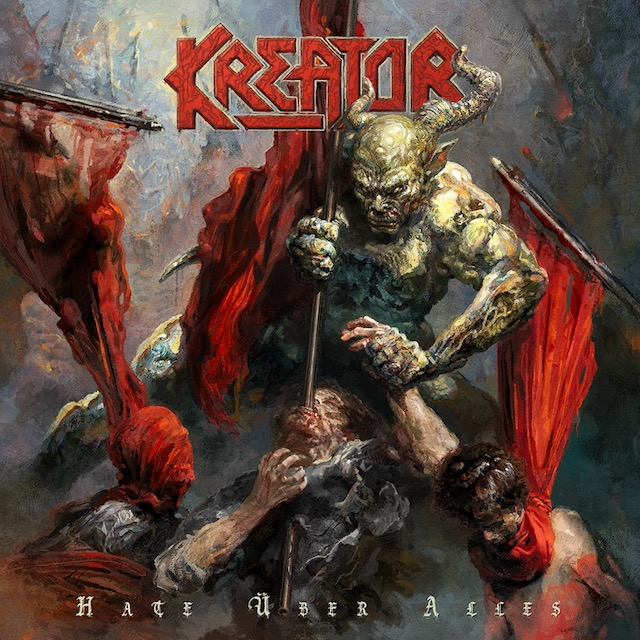 Video “The strongest of the strong”:

“Hate Über Alles” behind the scenes: