Hailing from Gozo (the land of megalithic temples in the heart of the Maltese archipelago islands), Upper Lip drives nostalgic, groovy hard rock music with a passion for its genre. Their main influences come from the splendid nature that surrounds the beautiful island and rock bands such as Rush, AC/DC, Rory Gallagher to The Smiths, Captain Beyond and even Waylon Jennings.

Since its inception in 2013, the band has played several concerts and festivals on the islands and has been very warmly received by rock music fans, which quickly translated into more concert invitations. Fast forward to 2019, the band embarked on a massive project to work on their debut studio album. The recordings took place at Temple Studios (where artists like Rammstein, Philip Boa, Mike Hedges and Siouxsie and the Banshees had previously worked).

Upper Lip recorded 11 original tracks that depict the groove and live energy the band is known for. The album, titled Deep Within, will be released worldwide on May 21 via Pride & Joy Music, and a music video has already been released for the standout track, “Keep Going,” which can be viewed below.

The group offered a preview of each of the tracks on the album (see below).

To order, download and stream the new Deep Within, go here. 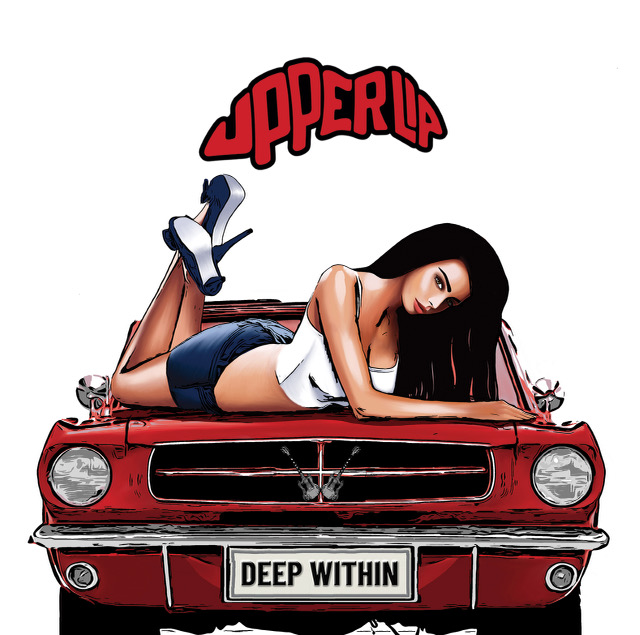 “Keep Going” – The first track from the album Deep Within. Starts with an energetic and searing guitar riff and continues with the raw vocal verses and the catchy chorus (Let’s keep going). The lyrics are about the spur of the moment, the electrical connection between two people with all its ups and downs.

“Marble Arch” – A deep and personal song that focuses on the pain that remains when things go wrong. Melodious bridge and guitar solos lift the song and paint this picture of past love.

‘Eyes On Fire’ – The song is about the magic of a rock ‘n’ roll show and the crazy people who are sometimes there. In this case, a peculiar girl who with a kind of sinister look. She surely enjoyed the show it was as if her eyes were literally on fire!

‘What Makes You Smile’ – ‘What Makes You Smile’ is a ballad that makes you reflect on the times in our lives that are difficult and awkward. It is also a song that gives hope and courage. Indeed, the song takes two perspectives, one that reflects on loneliness, “When you feel the pain inside, When you’re angry alone” and the other that encourages us to take comfort in the things that help us lift our spirits and that we should hang on to when life gets unbearable.

“Deep Within” (Instrumental) – The instrumental track located right in the middle of the album! Is a guitar-oriented track that started with an improvised guitar riff between songs during a particular gig. People loved it and it became a go-to anthem at our shows.

‘Mirrors & Masks’ – The punk vibe portrayed in this song reflects some of the negative sides of human nature, namely people who wear masks, who lie and cheat and end up driving others crazy.

“Hide” – Another ballad on the album. Hide is a moving song that reflects the bond between two people who care deeply for each other, but fate has separated them.

‘Be Free’ – Be Free harkens back to some of the anthemic rock songs of the 80s. It’s about moving on, being free from the things that drag you down. Thus, motivational sayings give a sense of hope and encouragement.

‘Desert Song’ – This song is a tribute to rock music legends of the past who still survive in the songs we write and the music we play. Despite the current lack of appreciation (wilderness) that our genre sometimes faces, it will continue to be strong.

“Never Lose Hope” – The longest and last track on the album. The song is a sort of undulating journey through time. His long, harmonious guitar solos evoke this feeling of despair but also create a feeling of hope and courage.